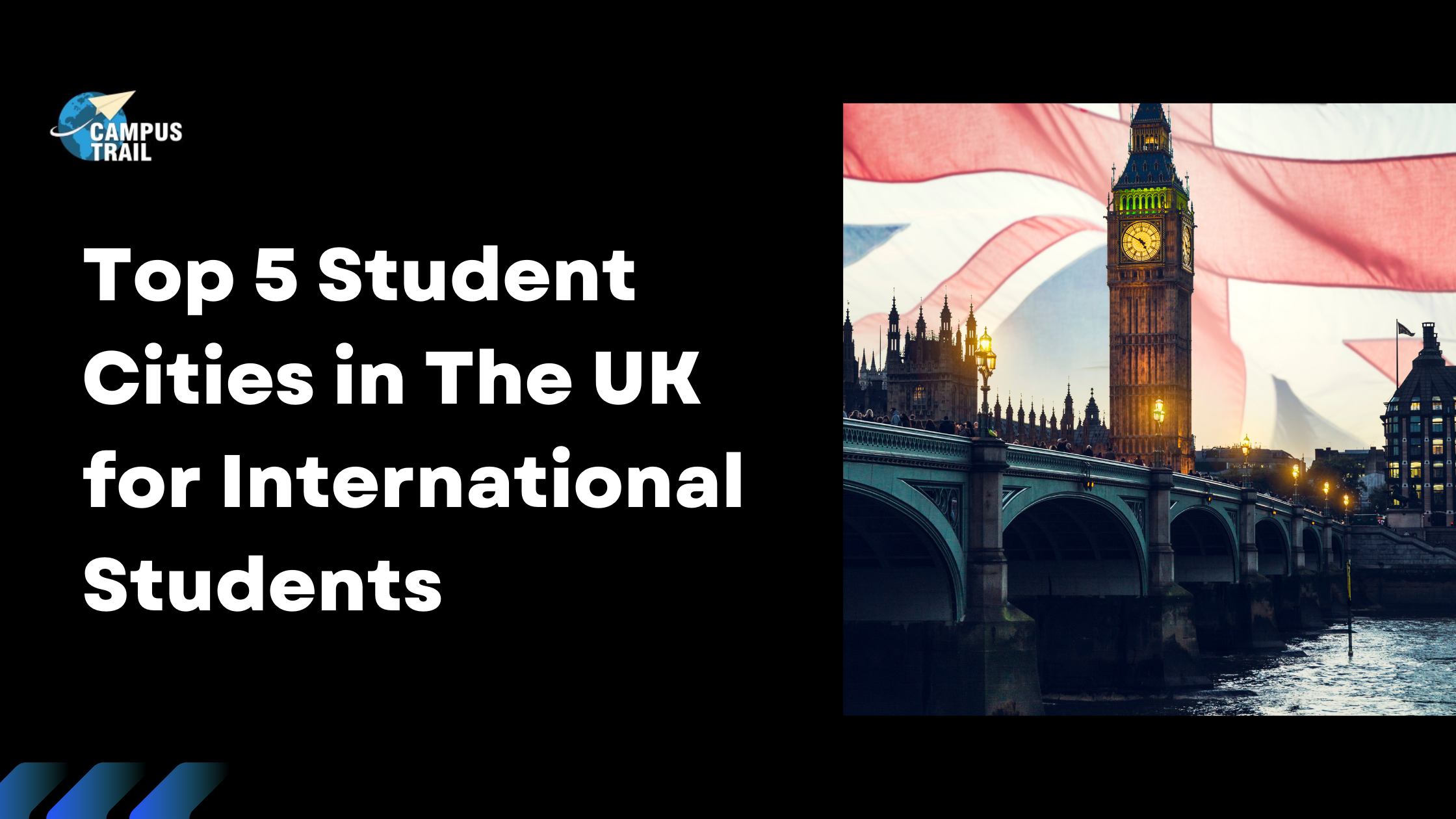 Student Cities in The UK: The UK is home to the leading educational institutions in the world with a conducive environment for pursuing world-class education. Studying in the UK opens up endless opportunities and will help you prepare for a strong career in your field.

QS best student cities rankings is a reliable annual ranking of popular student destinations around the world. Assessing over 160 cities around the world on the various criteria, QS releases a list of the best performing cities with the highest score points.

Their ranking methodology puts the various factors into consideration with a student-centric approach. The number of top-ranking world-class institutions in a city, international student ratio, student satisfaction, employment, student safety, pollution indices, social progress indices, and affordability is some of the important aspects they assess in their rankings.

As the UK is a leading study abroad destination with a high number of top-ranking universities and a reputation for groundbreaking research work, the UK has the highest number of cities ranked in the Top 100 student cities with a total of 14 cities, a number only matched by the US. These cities include:

The student’s life and culture in the UK are considerably unique and different from that of India. Read more about Students’ life and accommodation in the UK 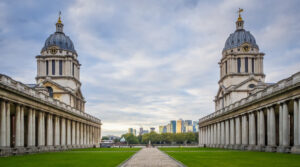 As it comes without a surprise, London has always secured the top rank in QS best student cities ranking for its unmatched record of excellence in the academic sphere with a strong student community of 382,000 students enrolled in 40 institutes of higher education in the city.

London accounts for 16% of the UK’s student population. It is home to some of the leading universities in the UK and the world. Here are the top higher education institutes in the UK.

London is home to some of the global leading firms across fields, with several prestigious companies having their headquarters in the city. This means you will have the opportunity to intern and potentially secure jobs at leading firms and gain the necessary exposure to build a strong career.

As the cultural capital of the UK, living and studying in London can be a rewarding experience. Living costs in London are considerably higher compared to other cities.

The city of Edinburgh is a popular study destination for Indian and international students for its world-class facilities, the city’s heritage, and its serene beauty.

Edinburgh is home to 6 international universities of high reputation and ranks 16th in the QS student cities rankings. The top universities in Edinburgh include the

Employment and job opportunities in the city are rewarding with a balance of prospects in academics as well as the industry. You may have the chance to intern or take up a job at a leading Scottish firm during your stay in the city.

From climbing up to Arthur’s Seat, the eroded volcano that constitutes one of the city’s seven hills to shopping on the Royal mile, living in Edinburgh as an international student will be a unique opportunity that will open up your career to new possibilities and help you get the best of what an education in the UK has to offer to you

Living costs in Edinburgh may be slightly less compared to London, with international students having to pay anywhere near 160-200 GBP per week (₹65,000/month)

Located in Scotland as well, Glasgow is the most populous city of Scotland and home to some of the best universities in the world and a large student community.

The port city is an important center of culture and learning in the UK and is known for its high educational standards and student-friendly environment.

Being an ancient city, Glasgow’s leading universities trace their origin back to the 15th century, with Glasgow University being one of the oldest institutions of higher education in the country and the English-speaking world.

Top universities in the city include

Glasgow’s universities are well known for their pioneering research work. Studying in the city would provide you with the opportunity to work with the best minds in the world contributing to the various fields of study. The city is ideal for students with prospective careers in academics, and industry-leading startups across fields.

The city has been an active cultural center in the UK with ballets and operas being popular forms of entertainment. Art appreciation is an important part of the city’s culture and several historical museums and sites are scattered throughout the city’s expanse. The city is also tolerant of diverse eating habits and has been declared the world’s most vegan-friendly city by PETA.

When you make the decision to pursue higher education in the UK, the required resources and expenses would be an important factor to consider. Read more about the Cost to study in the UK for Indian students.

Manchester is a vibrant study destination in the UK for international students with over 100,000 students enrolled in Higher education programs. The city is known for the presence of diverse cultures and a tolerant environment.

Manchester is home to a significant Indian population making it an ideal living and study destination for Indian students in the UK.

Manchester has historically been an economic hub of the UK and is an important landmark in global trade and commerce. Manchester is home to a wide range of industries and leading firms across fields as well as academics, making it a good option from the perspective of employment and work prospects.

The city of Manchester is known to be student-friendly and ideal for international students. Living in Manchester will come with its own unique cultural experiences. The metropolitan city is home to the largest non-legal library in the UK and the famous Manchester museum with over 16,000 artifacts, both owned by the University of Manchester.

Coventry is home to one of the largest populations of international students in the UK with over 6% of its population being students. The city holds close proximity to the cities of Birmingham (19 miles), Warwick (11 miles) Leicester (24 miles), all of which are a part of the UK’s higher education sphere.

42% of students at Coventry come from outside the UK, meaning that this city is home to one of the largest international student communities in the world with students coming from various corners of the world and diverse backgrounds. The University of Warwick, close to Coventry, is home to over 700 Indian students, the highest for any UK University.

The best top-ranked universities in the city are

Tracing its origins back to the middle ages, Coventry has a rich historical and cultural past and has been declared the UK city of culture for 2021. The experience of living in the city will be a once-in-a-lifetime opportunity for international students with opportunities to partake in various sporting events, literary festivals, and more. The city is famous for its Godcakes, a delicacy from the middle ages that are still baked today.

Affordability is an important aspect to consider while seeking education in the UK. Read about the top affordable universities in the UK for Indian students. 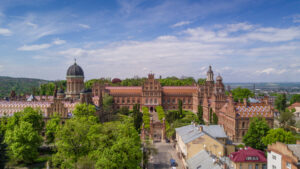 FAQs about the Best Student Cities in the UK

Which city has the most students in the UK?

London has over 360,000 students currently residing in the city accounting for 16% of the nation’s student population.

Which is the cheapest city for students in the UK?

Sheffield is the UK’s cheapest city for students according to Natwest with comparatively lower living costs and expenses.

Which city in the UK has the most Universities?

London has the highest number of universities and educational institutions in the UK with over 40 higher education institutes located in the city.

Studying in the UK is a dream for thousands of students who aspire to pursue their education at a world-class leading university. However, students often feel doubtful about the various aspects of pursuing higher education in the UK and seek expert guidance.

CampusTrail’s study in the UK counseling team is well experienced in helping students secure admissions to top universities in the UK and helping them make the transition. We shortlist the best universities based on your profile and help you apply, help you secure financial aid, and find accommodation in the UK.

Speak to our study in UK specialists, and book a free one-to-one counseling session today!

Requirements to Study In UK For Indian Students: A Complete Guide [2022]